Report on the Visit to Maori Land 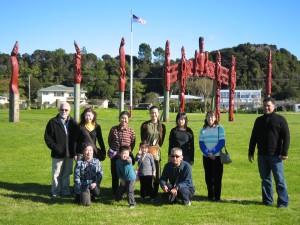 Waitangi Treaty Ground:
Hideo-san led us to the place, saying “This is the place we cannot skip.” We have had heard about that Hideo-san met Mr. Johnny Edmonds here when he was then the director of the Museum. This is the place where Hideo-san’s relationship with Maori started. This monumental place may be the best place to start for most of us who visit New Zealand for the first time.

A big waka (boat) was on the shore as a display of Maori traditional canoes. It was so big for one made from one tree. Fantail birds greeted us on the Ground in front of the Marae. The sculptures and relieves in the Marae were very impressive. They are primitive and mythical.

I bought a big wood bowl made from Limu tree at the Museum shop. This bowl is beautiful and would become a good gadget for a garden party of my own. (I would like to invite everybody to my home next time.)

Hone’s Dance Team and Dance Competition Festival:
Hone-san came to our hotel to great us and discuss about the next day’s schedule. I thought he is very Maori with his big eyes, stout body, and enthusiastic way of talking.

Next day, we visited Hone’s Marae, where we were welcomed with speeches and chants. After that, we watched his dance team’s rehearsal for the competition taking place the afternoon.
The harmony of their singing resonated in my head. Men’s facial expression while dancing were formidable. I enjoyed much. 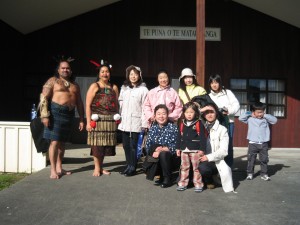 With Hone (at left)

At the festival, we not only saw dances and singings of various Maori teams but also we were wedged in on the spot to play ourselves. Nakabayashi-san and I played with her shino-bue and my shakuhachi and Mitsuko danced Flamenco to Nakabayashi-san’s Koto accompaniment.
I saw Haka performed by some of audience. It was very amazing.

On the way to the hotel, we stopped by a hot spring and relaxed there. We could talk with other visitors while bathing.

Bernard’s Marae:
Bernard and Manos came to our Hotel to pick us up. We were advised to buy gum shoes. We were told that it had been very rainy the days before and some places were muddy. But, we were very lucky because fine days continued since the second day of our staying in NZ.

But, we were a bit worried about staying at Marae because we did not have any ideas on what it would be like. Sleeping bags and gum shoes? Is it like an evacuation center?

No worries. It was very clean and equipped with enough mattresses and blankets. Hot water is available anytime in shower rooms. When we arrived at the marae, we were welcomed in there with a women’s beautiful chant. “Haere mai, haere mai…” The singer was Hinerangi, Bernard’s wife. The greeting with noses were very touching. We do not have such intimate greeting style. Alex, Manos’ elder brother and Toi joined us.

Bernard told us about pictures of their ancestors on the wall in the back. “Young people are now living in urban areas, but they gather here at special occasions.” The situation seems to be the same as what happened in countryside in Japan.

The dinner was served in the dining hall. I liked the sea food marinade and stew and kumara soup very much. They cannot be compared with meals at hotels. I was surprised to hear oysters and mussels were gathered by themselves.

I was also impressed by the shortness of dinner time. One reason might be that they do not drink beer or wine with meals. Hideo-san must have known that shortness. He ate very quickly (very different from usual) and very much. This quick eating style might be one of reasons why Maori are stouter than us in average?

Visit to the north part of the island:
We are told that the area around the lakes we visited was returned to Maori recently. Eels are nursed there. There are many other land reclamation still being negotiated. Alex told me he was busy with coordinating such activities.

Next, we visited Waipoua Forest Trust. Mr. Stephen King explains the Trust’s activities for restoring Kauri Forest. Before planting Kauri seedlings, vegetation suitable for Kauri trees must be recovered. For that purpose, a variety of plants such as Manuka are planted. Once the Kauri trees are planted, we “just sit and wait for two thousand years” said Stephen, jokingly.

A vast amount of Kauri trees was cut down by European settlers. Bernard told me that cities of Sydney and San Francisco after the big fire caused by the earthquake were built with Kauri timber from this area. The felling stopped only after a large part of forests was cleared. Waipoua Forest seems to be one of places which escaped clearing.

Stephen led us to the Big Kauri trees of the Waipoua Forest. He walked barefoot to avoid damaging forest ground. The Giant Kauri Tree (Te Matua Ngahere) was so huge with a girth of 18m!

Hokianga harbour is a calm and scenic place. The ancestors of Maori arrived here from nearby Polynesian islands hundreds of years ago. We took late lunch (fish ‘n chips) there.

Weaving:
Toi showed us in front of the marae how she weaves with raw flax. Her hands moved skillfully when scraping and rolling flax. Later, I knew that weaving and plaiting are very important and rich in Maori culture. I bought books about weaving at Wellington.

Feast and Concert:
For the feast taking place the evening, some of us went out with Bernard to gather watercress. After visiting several spots, Bernard finally found a stream where watercress abounded.

About twenty people gathered for the dinner and the mini concert. The dinner meal was superb. Oysters, mussels, and abalone. Pork, bird meat and sea-bream…. The front wall of the hall was decorated with ferns and the camellia flowers are set on the tables. It is like to have Christmas and a birthday at the same time.

The mini concert began with speeches from both sides and Haka performed by children. Then, we performed Japanese traditional music with koto, shamisen, shinobue, and shakuhachi. Mitsuko danced Flamenco. Also, children’s play song was included. At the end of the concert, a folk song (coal miner’s song) was played and danced by everyone. The song by a woman and a boy (I do not remember their names) was beautiful. We enjoyed the concert very much. Nakabayashi-san regrets not having brought a long (full) koto. She wished she could use kotos she left in NZ last time. When the concert ended, the sky was full of stars. Milky Way was clearly visible. Hideo-san pointed the Southern Cross.

Wellington:
We had dinner with Tania-san at Kingsgate hotel. We thank her for arranging our itinerary. Next day in the morning, we attended the Trust Meeting of Johnny, Williams, Tania, and Hideo-san.

In the afternoon, we visited Te Papa museum. Time was not enough to see much, but the guide showed us essential part of the museum. I saw Manos’ pottery works in the museum and the shop. They reminded me of Japanese Jomon earthenware. The tattoo of Maori (especially facial tattoo) reminded me of the facial tattoo of Japanese ancient people recorded by a Chinese historian in 3rd century B.C. According to the record, they were good at diving and catching fishes. Maori and ancient Japanese people might by some chance be related. At least, Maori still keep primitive mentality most Japanese lost sometime.

Ainu minority people of Japan:
After I came back home, I watched a NHK program on TV featuring the life of Shigeru Kayano, a first Ainu who became a member of parliament elected from Ainu people. Ainu almost lost their language forever due to Government’s long assimilation policy. He was very good at speaking Ainu and compiled a Ainu-Japanese dictionary as well as taught their people Ainu language. His father was once arrested by police because of catching salmon fish to feed his children. Catching salmon by Ainu had been banned by the authority, although salmon fish had been their main staple diet from the time immemorial. It was a sad story.

I felt sad when I saw meadows after meadows in NZ. But, I was encouraged very much by seeing Stephen’s arduous effort to restore the Kauri wood, land reclamation movement by Alex and others, and Maori arts, crafts, and music by Manos, Toi, Bernard, Hone, and many others.

Apology and Thanks:
I apologize for the delay to write this report. After I came back home, I had a little difficulty to “re-assimilate” into an old life in Japan and felt somewhat depressed. This may be one reason for the delay.

I thank all of you for your wonderful generosities toward us. I hope the relationship between us continues for many years to come. See you again. 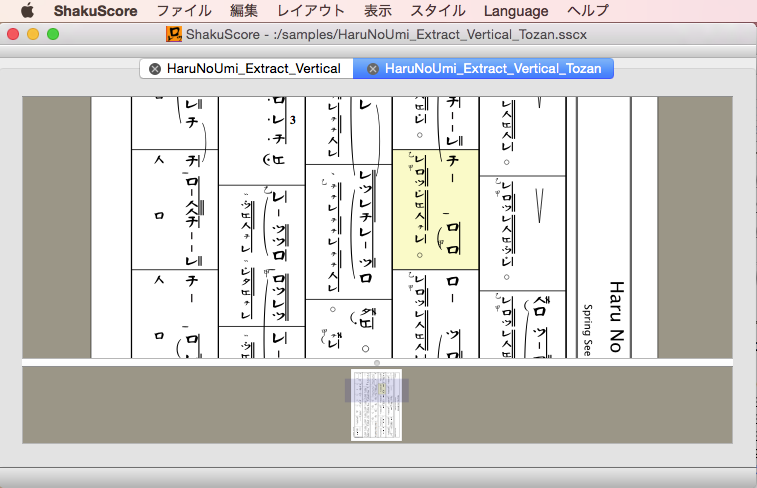 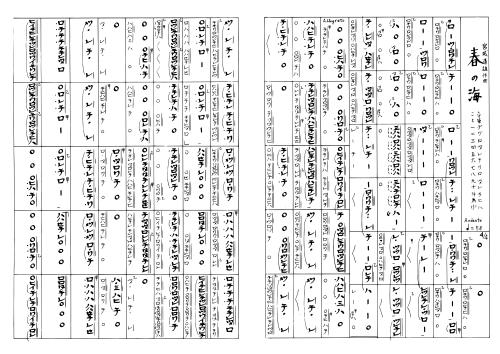